I heard about the Pints & Pups event on Facebook while I was still abroad, and made it a goal to take my fun and sweet puppy, Opie. What I mean by fun and sweet is that he’s the type to excitedly jump on you to lick your face, initiate play (which is normally the form of wrestling), and sit on your lap at any available opportunity. What I mean by puppy is an 86 pound, three-year-old black lab. I mentioned the lab part because I’ve noticed a lot of owners (my parents included) use that as an innocent justification: “oh, labs just take a little longer to mature than other breeds.”

In my household, Opie gets excused from some rule-breaking because he’s, “still a puppy at heart,” and also the simple fact that it’s kinda adorable when he climbs on the kitchen table. Or absolutely freaks out with uncontrolled excitement whenever someone new is around. I made it a goal to take him to the first Pints & Pups to expose him to more dogs and people in a social setting, figuring we could work on his manners and socialization. “Personal space” is not in this dog’s vocabulary, nor “calm.” He has so much potential, really, he’s just a little… hyper.

The event ran 12-5 at the Bangor Waterfront on Saturday, with us arriving around one o’clock. My mother had just informed me that morning that it was Opie’s 3rd birthday, June 23rd, the irony not being lost on me that he was officially 21 in human years just in time for a beer festival. After paying the $5 admission fee (dogs were free), we received a free Frisbee and a doggy poop bag. Nice touch.

Once you got inside the gates, it was how I imagine heaven to be. Mexican and barbecue food trucks, beer tents with my favorite Sea Dog Blueberry, live music playing folk rock. And, no matter where you looked, dogs. Dogs of all different sizes and shapes, ages, breeds. Dogs being carried by their owners, dogs pulling their owners, dogs in costumes. Despite his harness, Opie was still able to drag me in all directions so he could sniff this, pee on that. I managed to order a beer, which was spilled within two minutes as he darted after a schnauzer.

I am by no means a dog expert, but it didn’t take a genius to see that just standing there hoping he would eventually chill out wasn’t working. I saw a smaller, enclosed area behind the stage, where dogs could run around unleashed. We danced awkwardly across the lawn, me, trying to look like I was in control, him, tripping me as he weaved left and right to visit everywhere. Some owners were inside the fenced area, throwing Frisbees and playing. Others were circled around the outside, looking in like proud parents, encouraging their babies to go play. Once he was inside the dog park area and “free,” Opie transformed into the dog I know he can be. It was like he just had to get all that craziness out of his system. I felt like Cesar Millan for thinking of the solution. Surely, it’s not so obvious to let your energetic dog run around a little bit before taking him into a highly stimulating situation. Right?

After half an hour, I was able to leash him again and actually explore the venue. This time, he stayed right by my side, and greeted passing dogs without jumping on top of them. By this time, the crowd had grown immensely. I was actually very impressed with the turnout. There were fun carnival-like games you could play to win prizes, specially-made doggy ice cream, and even paw-print painting. When the band wasn’t playing, there were rescue dogs being brought out in front of the audience, all of which were greeted by warm rounds of applause. In addition to the food and games, there were booths with information about rescue and no-kill shelters, and information about adopting, donating, and volunteering.

We took a seat on the lawn, next to others in lawn chairs and on blankets, and I was actually able to relax and take in the atmosphere. Opie sat in my lap and took in his surroundings, too, but calmer and more content. I have never been in an environment where so many different types of dogs and animal lovers were brought together. I mean, hundreds of people throughout the day, stopping by out of love for their best friend and wanting to connect with other owners. I could see that all these dogs were quirky and unique in their own ways, and their people that embraced them for it. I also realized, for many dogs, like Opie, this was their first time ever being in a setting like this. I saw a Great Dane curiously eyeing a Jack Russell, his owner laughing and explaining, “he’s just never seen such a small dog before.” There were month-old puppies getting a taste of this big world, silver-muzzled dogs laying down, a life-time of wisdom in them. Shepherds, pitties, corgis, huskies, Saint Bernards, Chihuahuas, retrievers, all kinds of mixes. 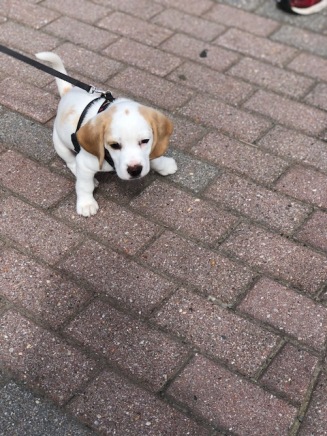 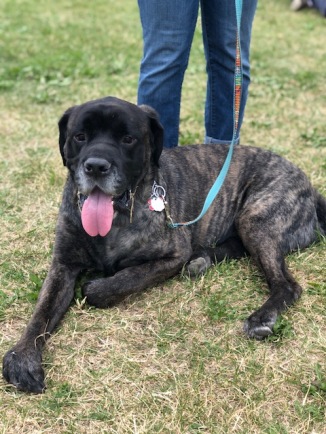 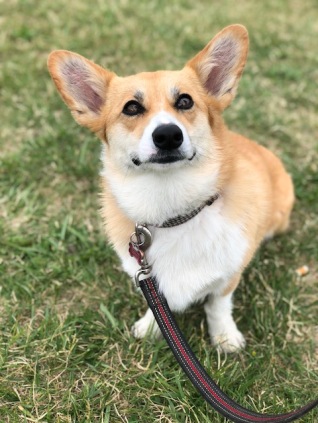 I didn’t go in with any expectations other than having my dog “get out” more. I didn’t expect to be so blown away by the diversity, by all the different dogs and humans interacting, by the big hodgepodge of music and barking and laughing and playing. If there is a second Pints & Pups next year, we will definitely be back. After we run around a little bit, of course.