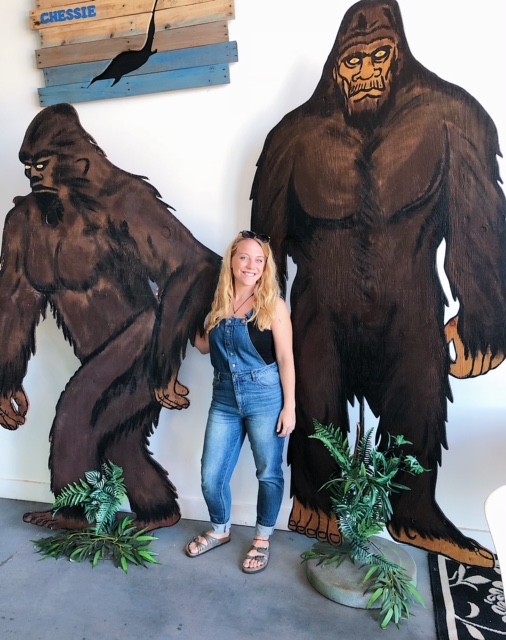 When my dad called me up with an idea for a Maine Monday spot, I braced myself. There’s never a shortage of suggestions from my old man in any area of my life, and often it’s valid advice. However, we tend to have differences in our definition of fun; i.e., things like spending hours in the baseball hall of fame, and a road trip through the bible belt listening to oldies.

But instead of anything about golf or war history, he excitedly told me about a museum he had heard about on the Travel Channel. It was in Portland and had material on Bigfoot. Ah, something we do have in common: being total nerds about legendary creatures. Sea Monsters, creatures in the woods, you name it – I’ve listened to a podcast about it’s folklore, or searched for a book on it. When I found out that my dad and his friends looked for Sasquatch out in Big Sur, California back in his college days, it was like seeing a picture of your parent riding a motorcycle or jamming at a rock show. They were really that cool? 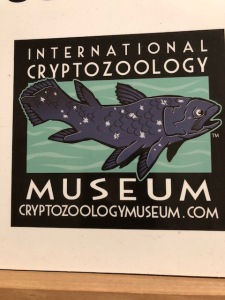 A quick google search told me we were looking for the International Cryptozoology Museum, about a 2-hour drive to Thompsons Point. Naturally, we were the first ones there, and had to wait for them to unlock the door like eager kids at a grand opening. A blond girl with thick-rimmed glasses and a Hawaiian shirt greeted us, whom I liked immediately. “You have the coolest job in the world” I started, to which she replied with a cheeky grin, “Yeah, I pretty much do.”

She then explained that her boss, Loren Coleman, started this museum in 2003, from his own personal collection that had been growing since the 50’s. We learned that the word “cryptozoology” actually means the study of hidden animals, meaning, species not (yet) confirmed. So, legendary creatures are the first thing that come to my mind, but then I discovered that it’s all kinds of animals. For example, giant squid, the Komodo dragon, and the platypus are all former “cryptids.” Even today, they’re finding new species as we’re able to get further into uncharted territory. Makes you wonder what’s really out there in the dense forests and deep water. Dun dun dun.

Anyway, this guy, Coleman, is known as the leading cryptozoologist in the world. We’re talking published books, screen time on popular television shows, traveling to conventions, and people flying in from all over to meet him and listen to him speak. And, this happens to be the only cryptozoology museum in the world. Right here in Portland, Maine.

Without giving specifics away, we saw casts of inexplainable footprints, pictures, interviews, articles and newspaper clippings, life-size replicas, video clips, memorabilia, models. I was shocked to hear of activity and sightings of mystery creatures in Maine alone. You’ll have to go and see about the legendary monster of Westbrook, “Wessie.”

When leaving, we grabbed a pamphlet highlighting an upcoming convention in the area, a two-day event in which lecturers travel from all over the world to speak. I pointed out how impressive it is that there’s such a big following around here for cryptozoology, and also noted that multiple people had trickled into the museum since we had arrived. The employee explained that, “its really filled a need in the community.”

Since we were already in the area and the day was young, we decided to catch a ferry to Peaks Island. A friend had showed me the little island a couple years ago, and since then I had been absolutely smitten. We sat next to two little girls on the boat, and I felt that same giddy excitement they were outwardly demonstrating. When we were finally set in motion, the horn blowing, it could have been a ride at Disney. The smile on my dad’s face said he felt it, too. Do you ever get too old to feel a sense of wonder and freedom being on the ocean?

All the tourists shuffled onto the island in a huge cluster, and my dad and I bee-lined it up the street to get away from the crowd. I felt like a poor guide, because although I had been there twice before, I didn’t really know anything to do or places to go. We were wandering aimlessly when we stumbled upon them. The golf carts.

Now, I had been to the island before, but only on the main strip with the few restaurants and attractions. We rented the vehicle for an hour, and scooted around the island loop making up most of the perimeter. Those of you reading this probably know that I’m a talker, and very rarely find myself without anything to say. Yet I sat open-mouthed in the passenger seat, my attention traveling left and right like a tennis match between the quaint ocean homes and never-ending shoreline on either side of the road. There were stops along the loop to sit on a bench or walk down to the water, and we saw plenty of people picnicking and exploring tide pools. Eventually, I took my turn driving the cart. This lasted about two minutes before I asked my dad to switch with me; It was too hard to take in the lupine, waves, light houses, and homes while managing to keep us on the road. 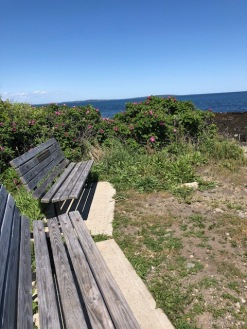 The man that rented us the golf cart said if we drove non-stop it would take 20 minutes to make it back, but we returned it with only a couple minutes to spare. He and his wife had been on the island 37 years (yes, even in the winter months!) and are hoping to comfortably retire there. We passed an ice cream shop on the way back to the boat landing, a treat I would normally deny myself in pursuit of trying to be “healthier.” But this time, be it the sunshine or my good mood or the carefreeness in the air, I didn’t say “no thanks” to the idea of cookie dough.

On the returning ferry ride, I thanked my dad for accompanying me. He looked at me with a surprised expression and said, “I just spent the day in great company, learning about Bigfoot and being on the ocean. That sounds like a perfect day to me.”

I guess there’s one more thing we agree on.