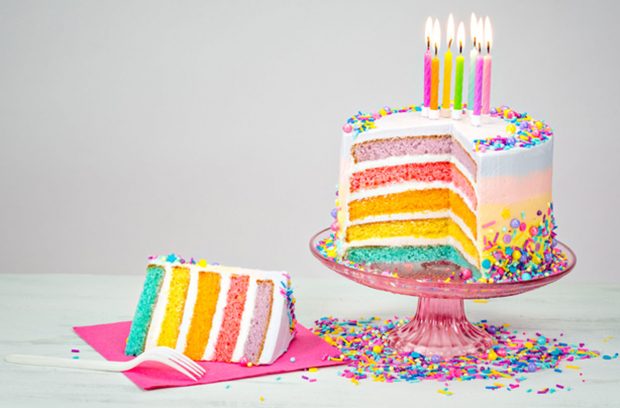 The Birthday Cake That Made Me Cry

Where to start this story…

I think we have to go back. All the way back to 25 years ago, when I (followed by a twin brother) was born on a morning that happened to be on the 28th of December. I have heard the blurred period between Christmas and New Years described as the Twilight Zone. Gray area. The dazed time when everyone’s asking, “what day is it?” It’s easy to feel lost in the shuffle.

Jesus’s birthday is a hard act to follow, am I right?

My mother swears we waited and celebrated birthdays at Chuck E. Cheese in March when we were little, but I have no recollection of this.

Now, I’m well aware I’m being dramatic here *clicks off sad violin music*.  As an adult, I truly get it. People have always shown up and celebrated our birthday, made us feel special. But now I understand the glazed over expressions, the eyes saying, I’ve already consumed a surplus of Holiday carbs, and, these last few weeks have cost me a shitload of money. This time of year is exhausting.

With that backstory laying a foundation, let me momentarily jump ahead to a completely different topic involving a Spring almost two years ago. Are you still following? I was hiking the Appalachian Trail, when a stranger reached out to me via Instagram. Not the creepy kind of stranger. The generous, goodnatured kind that wants to help with nothing in return. This woman was interested in my hike and kept up with my journey, sending me packages and letters along the way. She was my Trail Angel, and even after the hike was completed, we remained penpals. Through life changes on both of our ends, we built a friendship through letters and postcards, despite never having met before.

This is the part where these two circles of information have a line drawn between them. A couple days before this past Christmas, I get a text from my penpal asking if my birthday was right before or right after the holiday. She then asks if I am able to spare about an hour of my time within the next couple of days, as she has a surprise for me. I am being sent on a mission, which I later find out is to Walmart in Bangor.

When I get to Walmart, she instructs me to park around back in the pickup area, and to wait patiently as she “checks me in.” And then, I am greeted by a smiling employee knocking on my window, carrying Sea Dog blueberry beer and my favorite kind of birthday cake. I had written about how much I craved these things when I was hiking on the trail, and she remembered. “I’m supposed to say Happy Birthday to you” the employee says sheepishly.

Have I mentioned my friend lives in Georgia? What about that she has two young sons and a husband and enough on her plate to worry about besides some girl in Maine? Yet, she still took the time to do a little bit of research, make some phone calls, and as a result, make me smile like I had just won an Oscar. Oh, I also cried like I had just won one.

So, this year, in the mystifying gap between the 25th of December and the 1st of January, I thought about kindness and friendship (I mulled this over in between bites of my cake and beer, of course). I thought about how I haven’t really done anything like that for a friend, never mind a stranger, but that I want to. I thought about what I can do to be a little more like my penpal in my everyday life. How all cliches aside, it really is the thought that counts: paying attention, small actions that have big impact. Nothing beats it. Though rainbow birthday cake is a close second.

3 thoughts on “The Birthday Cake That Made Me Cry”