The Maine Hike Guaranteed to Give you Chills

If you ever mention key words such as “Maine” and “Haunted,” or really anything having to do with New England ghost stories and legends, you’ll see my head tilt and ears perk up like my dog’s when I ask, “wanna go for a walk?”

Call me dark, but I’ve always been intrigued by spooky lore. So, when a couple people sent me the same article on “Maine’s Most Haunted Hikes”, I dog-eared the page (well, bookmarked it on my browser), and vowed to do at least one of them before summer ended.

That’s how I ended up in Camden Hills State Park, at the base of Mt. Megunticook, about to embark up to Maiden Cliff. As Mikayla and I applied bug spray and smiled at families passing by, the atmosphere didn’t feel too chill-worthy. I didn’t really know what to expect other than an “easy-moderate” hike and a view of a white cross at the top.

The hike up to the cliffs was short (about 45 minutes), but we both worked up a sweat and tried our best to mask our heavy-breathing. The blue-blazed trail guided us alongside a brook, then later, up a steeper section before flattening out. As we neared the tree line, the white cross was instantly visible, the backdrop a pristine view of Megunticook Lake as you peer off from the 800-foot cliff. 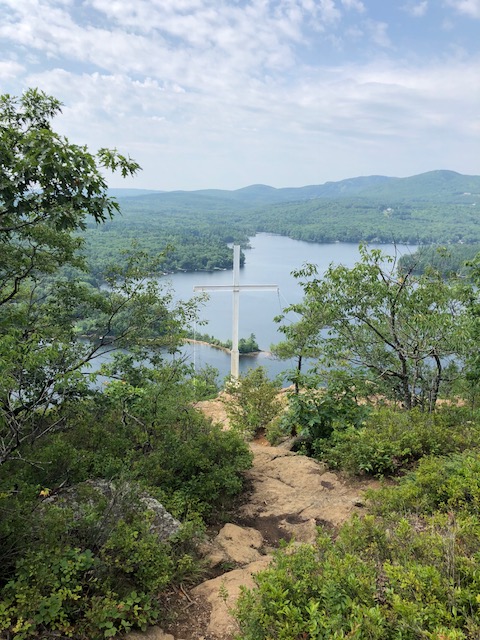 The sheer size of the memorial is enough to take your breath away, but something else in the air also leaves you quieted. I scrambled down a few rocks to get a better look at the granite monument adjacent to the cross. Despite a hot August sun and cloudless sky, goosebumps freckled my arms. The placard read,

On May 7, 1864 this 12 year old farmers daughter fell to her death from this cliff. According to legend she was here as a member of a Maying party and fell trying to catch her wind blown hat. This cross erected in her memory

I had heard that supposedly, people have spotted an apparition of a young women in a dress and sun hat wandering the cliffs, but I never knew the origin. Looking up at Mikayla, I could see we shared the same eerie feeling. In our almost 15 year friendship, I’m not sure we have ever been collectively speechless. I later learned that the cross has been replaced a handful of times due to damage from the elements, and even vandalism in the late ’80s (how messed up is that? kids those days…) The cross that we were looking at was actually put up in 1992.

We found a spot on the rocks a few feet away, and sat for a couple minutes taking in the scenery and the boats passing by in the water below. When it came time to descend to the parking lot, we took the “Scenic/Ridge Trail” and were nothing less than impressed with the picturesque views of rocky cliffs, dense woods, and stunning water. It’s well worth it, and although there are a few short climbs in which we had to use our hands, it’s not a very difficult hike.

We made it back to the car with plenty of time to spare. Specifically, plenty of time to grab a burger in downtown Camden before having to be back to Bangor. There are other connecting trails if you choose to pursue a longer hike. Make sure to get there early, as the Maiden Cliff Parking on route 52 was completely filled when we returned back to the lot. It’s a quick hike with rewarding views of the surrounding area, and – if you’re interested – there’s plenty of articles about Elenora and the cross marking her tragic end on that unfortunate day so many years ago.

2 thoughts on “The Maine Hike Guaranteed to Give you Chills”