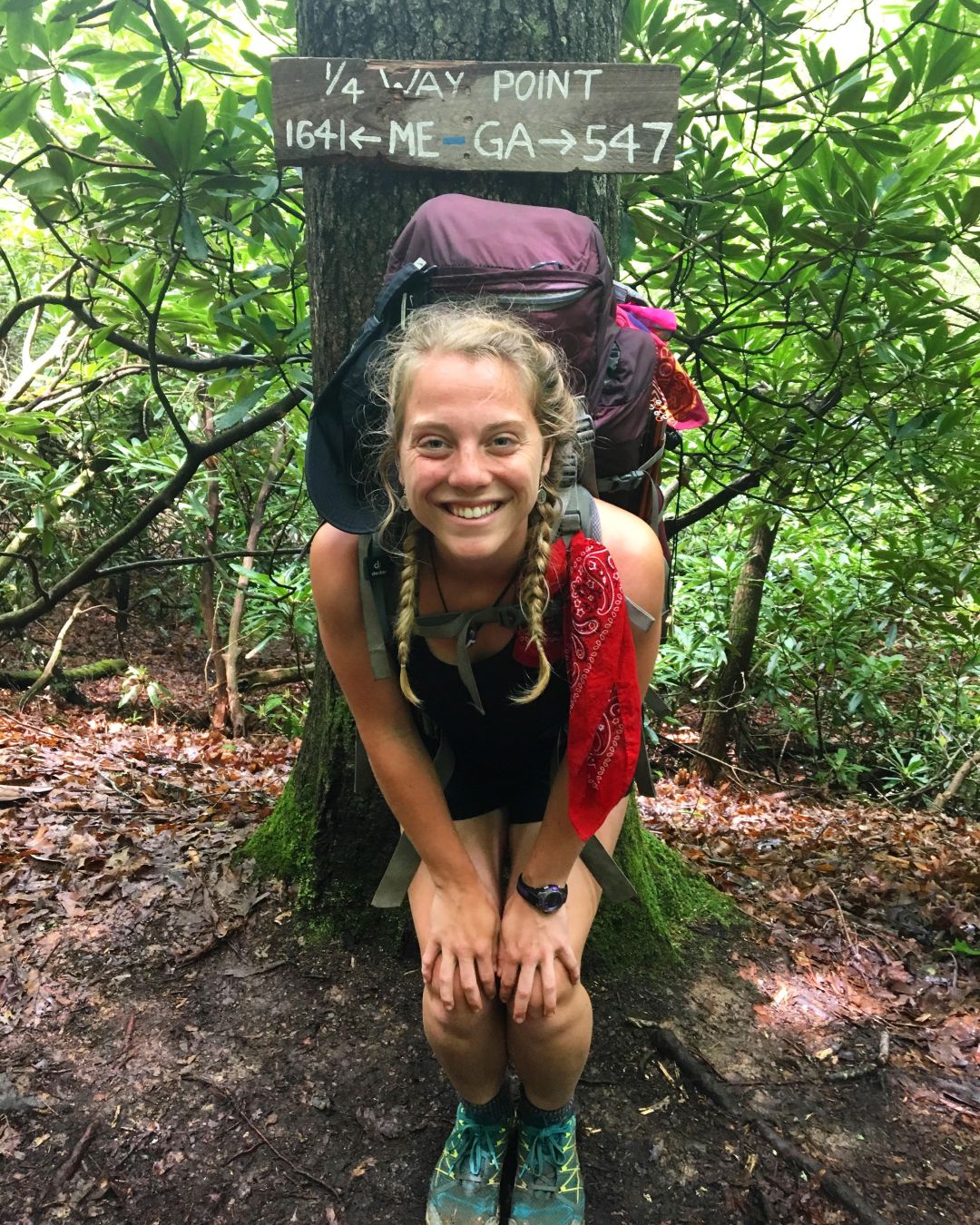 My first week on the trail, I met a hiker sketching the surrounding scene in a shelter. She was peering off into the gray rain, sitting quietly to herself, and maintained this composed coolness that I’ve always admired in others (I’m more like an excited puppy in my demeanor). In an attempt to make conversation, I asked how phone service was at this location. I know, I’m really skilled in the connecting-meaningfully-with-strangers category. She politely explained that she hadn’t checked yet; she only had a flip phone that she used periodically in attempt to ‘unplug.’ No social media, no email, no texts.

What a romantic idea, I thought. Very Thoreau-esque. And as I entertained the idea of myself truly going off grid, I knew that it ultimately wasn’t my mission. I applaud those that can disconnect and be fully and privately immersed in the woods. But me, I wanted to share my journey. I wanted to write about my experiences, post about trail life, show my friends and family and strangers the highs and lows of the AT. So that is what I vowed to do.

And then I kinda sucked at it.

The first 800 miles or so I did O.K. I posted a blog about once a week, and got great feedback. Even cooler, it wasn’t just my parents reading them. I had a lot of strangers or distant connections reaching out to me. Like, a classmate’s cousin, or my neighbor’s coworker. Occasionally, I’d meet a trail angel or even a cashier at a store that would ask for my information so they could follow along. That felt good. Really good.

As I walked, new ideas would come to me effortlessly. My writing felt important, even if I was just talking about how good it felt to shower after a week, or the strong bond between two people over shared Ramen. Even after hiking all day, I could get into camp, carry out my nightly chores, and then still ramble out my thoughts in my journal or even type a draft for my blog.

But after a while, it became increasingly difficult to find the time and motivation to even consider posting a blog. Whether it was loved ones visiting me, small injuries and aches that left me in a cranky, distracted mood, or bigger miles bringing me into camp late, I seemed to always have an excuse as to why I couldn’t write. Not even in my journal. My Future Self would protest, ‘make note of what you saw today, the people you met, the way the heat rash is making your back feel like it’s being tickled by a bug zapper,’ and my Current Self would retort, ‘you are too exhausted to even care about sharing your sleeping space with mice tonight, of course you don’t have to write.’

I got hit pretty hard by the Virginia Blues. Then, later, a sense of senioritis because I knew I was coming off the trail for a wedding. I thought that the trail would become easier in time, that I would be able to fall into a gentle acceptance of my new lifestyle. I believed that the first two weeks had to be the hardest. But in actuality, the trail became much harder for me mentally. There was never a point in which I truly wanted to quit, but that’s not to say there wasn’t an abundance of tears, kicked rocks, and grunts of frustration. Everyone knows the trail hasn’t been a walk in the park for me, but I haven’t really emphasized how soul-crushingly hard it’s been, either. I mean, this thing has truly broken down my mental state and my physical health. I think I’ve always felt a strong loyalty to the trail, and that perhaps I would be deemed undeserving if I dare say that it’s not all rainbows.

In the beginning, the days seemed to fly by, and often I would walk all day in a sort of productive meditation. But the last couple weeks, there have been times I’ve stared at my watch in literal disbelief, my jaw hung open at the unfathomable realization that it was only 2 o’clock, and I still would be hiking for 6 more hours. The first day in New York, I’m not exaggerating when I say I stalled beneath a white blaze for 10 minutes; I may have actually said aloud, ‘I’m supposed to go up this?’

The lack of motivation mirrored in my writing. Or lack there of, I should say. Once I went through a dry spell of not writing, Newton’s law seemed to take over: an object at rest will stay at rest. And I was the object. Except I wasn’t really resting because I was walking for 12 hours a day. Are you still following? I still wanted to write, to share my experiences, to be the open book about the ups and downs about the trail, but so many weeks had gone by since my last article, and it started to feel more like a chore than a highlight. I became frustrated with myself. What about all those people that have the energy and commitment to make videos about their journey? What about the people that still seem pleasant at the end of a 28 mile day?

As I mentioned, I came off the trail for a wedding. With a week of ‘free time,’ I again vowed that I would get back to my writing. I wasn’t anticipating to feel like I had been hit by a bus after a day at home. It was difficult to get out of bed; I was utterly exhausted, feeling nauseous, and not wanting to do anything (which, if you know me, is the exact opposite of how I normally am. Remember the excited puppy reference earlier?). The doctor suggested that my escalation in fat storage and swollen glands was a result of being catapulted into ‘survival mode.’ After a Lyme test, which fortunately came back negative, and reassurance that all my blood work was O.K., I accepted that I truly just needed this downtime to be gentle with myself, and to become excited again about the trail.

So, that brings me to here, ready to finally answer the ‘are you alive?’ questions. For those that have asked about me, I sincerely thank you. Know that I won’t be taking a hiatus that long again! When I get back to the trail, I will have 800 miles left until I summit Katahdin. To answer the question, yes I am alive. And believe me when I say that despite the mental and physical pain, I am also well.